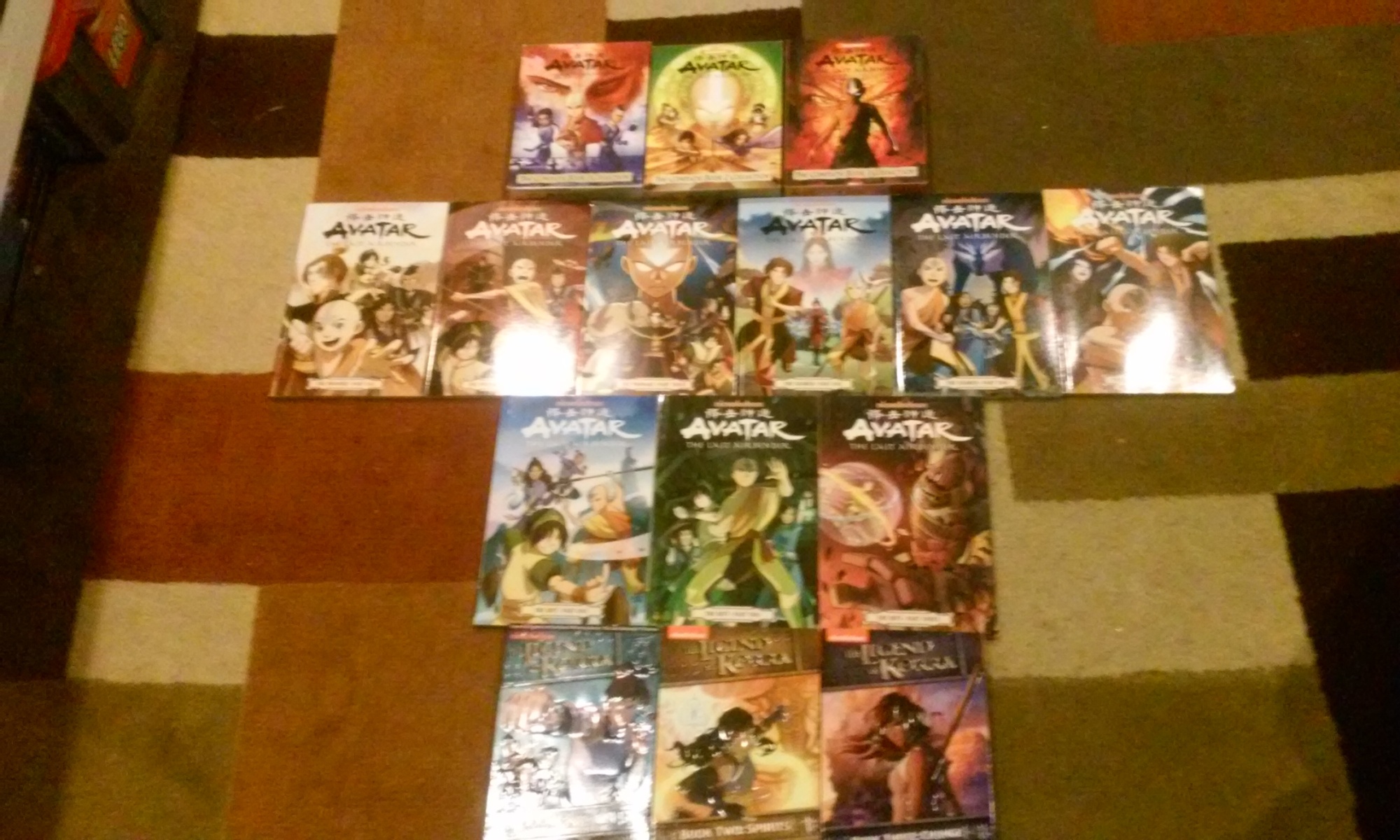 As of recently, I’ve become more open to blogging about storytelling on other mediums besides books. I feel that the more I talk about other stories that are being told in ways beyond the written word, I think it will make for a better attempt at engaging dialogue about such narratives and also to aid myself in becoming more well-rounded in that. My first venture out into doing so- on the television landscape- was when I provided my feedback on “Fresh Off the Boat” the weekend following its premiere. Now, in celebration of the decade since its premiere, I shall devote this post to my thoughts about one of my all-time favorite television series: “Avatar: The Last Airbender.”

February 21, 2005 was the day children’s television network Nickelodeon aired a one-hour premiere of its newest series, “Avatar: The Last Airbender.” Set in a fictional world where some people have the ability to manipulate (or bend) the natural elements (water, earth, fire, air) the show follows the Avatar- the one who can bend all four elements- as he and his friends are on an adventure to bring peace and unity to the world by bringing an end to the 100-Year War and the Fire Lord. While that may sound like a fairly simple synopsis, the show brings layers of character development, plot lines, politics and philosophies; wherein which it has harbored a large fan following in the ten years since it first went on the air.

The original series aired from 2005 to 2008. This later led to the creation of a spin-off series, also on Nickelodeon, called “The Legend of Korra” which aired from 2012 and ended two months ago. In addition, Dark Horse Comics also publishes a graphic novel series that fill in the gap between the end of “Avatar: The Last Airbender” and the beginning of “The Legend of Korra;” all of which are written by Gene Luen Yang and the artwork done by Studio Gurihiru.

I had just turned 13 at the time the show started airing and in all honesty, I hadn’t heard anything about it prior to its air date. I didn’t watch a lot of TV at the time, which was why I was taken aback when I found myself watching the first two episodes of the series. Even though it was meant for a demographic younger than me, there were times where it sure didn’t feel like it. I also remember how shocked I was when I realized that this was the beginning of a television series, for prior to the end of the second episode, I thought I was watching a movie made for TV. It was that cinematic of an experience and I knew then that this was something very special.

I love the show, pretty much for the same reasons as other fans. For one thing, there are a number of strong female characters. In a time now where people are just starting to emphasize on the portrayal of women in television and film, many who don’t follow “Avatar” may be surprised to see how co-creators Mike DiMartino and Bryan Konietzko were able to obliterate all and any restrictions regarding female roles through their characters such as Katara, Toph, Suki, Azula and more. This was even further emphasized in “The Legend of Korra” when the Avatar is reincarnated into a girl.

Another example was how they were able to draw upon Asian and Eskimo cultural influences without degrading any of it. All of the benders are able to manipulate the elements through martial arts such as tai chi and kung fu, the writing used in this universe is in Chinese calligraphy, and the philosophical elements of religions such as Buddhism, Daoism, and Hinduism were incorporated into the way the characters think and perceive certain subjects. The way the co-creators were able to do that was very clever and creative.

I feel that the way they’ve handled the politics and moral subjects in the show were done in a way you could see and think differently about such topics. Also, how the characters were developed was nothing short of spectacular, for unlike other shows on Nickelodeon, they came with depth, flaws, and back stories that have shaped who they’ve become. That especially goes hand-in-hand with the character of Zuko, for even in the beginning, I could tell that he wasn’t the “bad guy,” despite trying to capture the Avatar.

This is a show that I immediately fell in love with and, being in my early teens at the time, perhaps was one I needed. Like I said before, I didn’t watch too much TV at the time, and while I didn’t know the reason why before, I feel that now was because I was tired of the same stories being told over and over again on television, with nothing moving forward and nothing improving. Already as a kid, I wouldn’t have considered any of the girls and women on the media landscape to be a worthy role model for me, because practically none of them were like me personality-wise nor was my physical appearance anything but similar to theirs. I found refuge in the character of Katara (and Korra in “The Legend of Korra”) for being strong, female characters whom personality-speaking were similar to me. Not to mention that it’s because of them that I strongly believe that if I were a character in the “Avatar” universe, I would probably be a waterbender.

The fact that it’s been 10 years since the show first aired is mind boggling to me. Not only does it not feel like it’s been that long, but I just can’t believe this universe has been with me for that long already. Just last month I re-watched the entire series in a week, and it felt so good to do so. It felt like getting reacquainted with friends you haven’t seen in a long time. It served as a definite reminder as to why I fell in love with the show in the first place.

If you listened to the interview DiMartino and Konietzko did for the Nerdist several months ago, you’ll see that there’s no way they would have expected for their show- which was born out of an assignment from Nickelodeon- would have made as big of a splash as it did. I look up to these two thoughtful, creative men as storytellers and I await to see what they’ll do next in their careers.

Where “Avatar: The Last Airbender” will go in the future to come can lead to numerous possibilities. But my feeling is by the time the 20th anniversary comes around, I’m sure many of the original viewers will have introduced the show to their children, and the legacy of the boy in the iceberg will continue on to the generations to come.

“The true mind can weather all the lies and illusions without being lost. The true heart can tough the poison of hatred without being harmed. Since beginning-less time, darkness thrives in the void, but always yields to purifying light.” -Lion Turtle, “Sozin’s Comet, Part 2: The Old Masters,” “Avatar: The Last Airbender”

2 Replies to “10 Years of Honor and Bending: My Memories of “Avatar: The Last Airbender””